The My Body and Me Kiwi Crate is another duplicate for us, but Gwen wasn’t able to do this one that last time we received it. She was very happy to have this one to herself! 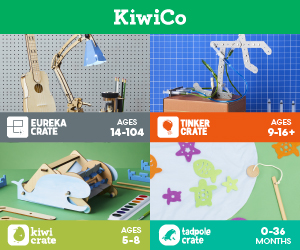 This crate was a surprise to me actually when we first did it. I had gotten so used to the STEM-type projects in each crate that a project that had sewing in it seemed almost out of place! The kids really seemed to enjoy it and this crate actually sparked some discussions among my kids about what functions the brain and heart perform for our bodies.

In this crate, your child will build her own stethoscope and make her own plush organs, which sounds weird but they actually turned out pretty cute! There is also one extra project to take “X-rays” that we weren’t able to do.

Putting the stethoscope together was not too difficult, but my daughter did need help with pushing the tubes all the way onto the T connectors. The stethoscope does actually work too! In fact, we still have the stethoscope from the previous box, so it has held up to some play time.

The pieces for the stethoscope

This is a really clever way to make your own stethoscope out of everyday items. I give kudos to the one who thought it up!

Gwen had issues sewing up the organs while holding the felt pieces, so I held them for her. Watching her sewing motions had the unexpected side effect of making me feel very sleepy!

Gwen’s plush organs. She put the googly eyes on without help and drew their faces.

The included body chart with the plush organs

There was also a dry erase marker and a doctor’s check-up card in the crate. I think this is a good way to help a child know what to expect when they go to the doctor. The check-up card has a lot of the same questions that a doctor would ask you at an appointment.

So even though the My Body and Me crate was an unusual one, it was educational for my kids and had some interesting projects in it that they enjoyed making.

Is Smoky the Easter Egger a Hen or a Rooster?

Be geeky with us! Cancel reply

Disclosure: Bear in mind that some of the links on The Geek Homestead are affiliate links and if you go through them to make a purchase, we will earn a commission. However, the decision to purchase through an affiliate link is yours.

‪Have to be careful where we sit now. ‬ ‪#Ki

Next level coffee drinking. Roast your own. #coff

‪It is starting to get warm. I can’t close the